The formula 1 driver section allows you to select your favorite F1 driver and view different breakdowns on their career F1 points, team battle statistics, race by race breakdown, how they performed for specific constructors and general career statistics. Here you will find the F1 statistics for George Russell in full. 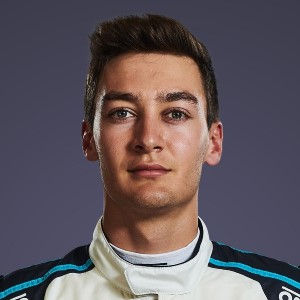 George Russell is a British racing driver currently competing in Formula One for the Mercedes team. Before joining Formula One, Russell began his racing career in karting and progressed through the junior categories of motorsport, including the British Formula Four Championship where he took the title in a four-way battle at the final race, the Formula 3 European Championship and in 2017 the GP3 Series taking the title in his rookie season. And than again in the 2018 FIA Formula 2 championship winning over the likes of Lando Norris.

Russell made his Formula One debut in 2019 with Williams, where he has consistently outperformed his teammate. He finally scored his first points in his second season altough this happened as he had the opportunity to stand in for Lewis Hamilton at Mercedes, where he impressed with his pace and performance. In 2022 he made the definitive switch to Mercedes.

Russell is considered a talented and promising driver in Formula One, known for his strong racecraft and his ability to consistently deliver strong performances. He has a reputation for being a quick learner and for adapting quickly to new challenges, which has helped him to achieve success at every level of his career so far.