The formula 1 driver section allows you to select your favorite F1 driver and view different breakdowns on their career F1 points, team battle statistics, race by race breakdown, how they performed for specific constructors and general career statistics. Here you will find the F1 statistics for Daniel Ricciardo in full. 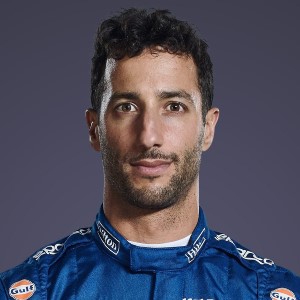 Daniel Ricciardo is an Australian racing driver currently competing in Formula One for the McLaren team. Before joining Formula One, Ricciardo began his racing career in karting and progressed through the junior categories of motorsport, including the British Formula Three Championship and the Formula Renaults 3.5 Series.

Ricciardo made his Formula One debut in 2011 with HRT, where he consistently outperformed his teammate. He then joined Toro Rosso for three seasons before moving to Red Bull Racing, where he spent five seasons and won seven races. In 2021, he joined McLaren to replace Carlos Sainz, partnering with Lando Norris.

In his personal life, Ricciardo is single and enjoys spending time with his family and friends. He is also an avid fan of football and supports supports the Australian Football League's West Coast Eagles.

Ricciardo is considered a talented and exciting driver in Formula One, known for his strong racecraft and his ability to consistently deliver strong performances. He has a reputation for being a quick learner and for adapting quickly to new challenges, which has helped him to achieve success at every level of his career so far. He is also known for his friendly and approachable personality, which has made him popular with fans and his fellow drivers.